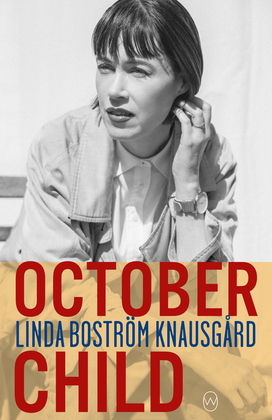 by Linda Boström Knausgård (Author), Saskia Vogel (Translator)
Buy for $14.99 Excerpt
Nonfiction Biography & autobiography Personal memoirs Literary
warning_amber
One or more licenses for this book have been acquired by your organisation details

• The book everyone has been waiting for! Linda Bostrom Knausgaard finally opens up about her struggle with mental illness and her marriage to Karl Ove Knausgaard.
• In a piece entitled “At War – Why Revenge novels are taking off in Norway”, published in The Guardian, the writer states: “Knausgaard followed My Struggle with the Seasonal Quartet, published in Norway between 2015 and 2016. Last month his second wife, Linda Boström Knausgaard, herself a successful writer, published Oktoberbarn (October Child) in Sweden, her take on events depicted in Knausgaard’s Spring and Summer. However, October Child does not negate her ex-husband’s book – rather, their writing now appears to be in dialogue. Karl Ove writes in Summer that the couple agreed to separate; in Oktoberbarn, Linda claims that it was his decision. Her first openly autobiographical book therefore becomes an act of self-examination powerful enough to match if not surpass those of her ex-husband.”
• Openly autobiographical, this memoir chronicles the worst time in Linda’s life, when her then husband had her admitted to a closed psychiatric ward against her will, and subjected electroconvulsive therapy.
• Linda’s memoir is a fierce break with contemporary psychiatry and scathingly critical of electroconvulsive therapy, which resulted in the loss of many of her memories. After publishing October Child in Sweden, she received many letters from patients suffering the same consequences. The memoir sparked a controversy in the psychiatric community in Sweden, and we can expect heated discussion in the US.
• Linda is by far our most reviewed and especially most interviewed author. For the publication of Welcome to America, Linda was interviewed by Vanity Fair and The New Yorker, reviewed in a multitude of high-profile outlets, had a short story featured in The New Yorker and was longlisted for the Best Translated Books Award. Reluctantly famous through Karl Ove Knausgaard’s My Struggle, everyone wants her take on the story. So far, she has been intensely private, avoiding the topic in interviews – until now!