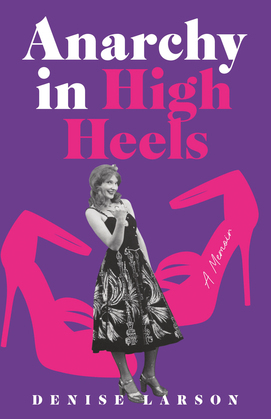 In 1972, access to birth control and a burn-your-bra ethos were leading young women to repudiate their 1950s conservative upbringing and embrace a new liberation. Denise Larson was a timid twenty-four-year-old actress wannabe when, at an after-hours countercultural event, The People’s Nickelodeon, she accidentally created Les Nickelettes. This banding together of ¬¬like-minded women with an anything-goes spirit unlocked a deeply hidden female humor. For the first time, Denise allowed the suppressed satirical thoughts dancing through her head to come out in the open. Together with Les Nickelettes, which quickly became a brazen women’s lib troupe, she presented a series of feminist skits, stunts, and musical comedy plays. In 1980, The Bay Guardian described the group as “nutty, messy, flashy, trashy, and very funny.”

With sisterhood providing the moxie, Denise took on leadership positions not common for women at the time: playwright, stage director, producer, and administrative/artistic director. But, in the end, the most important thing she learned was the power of female friendship.