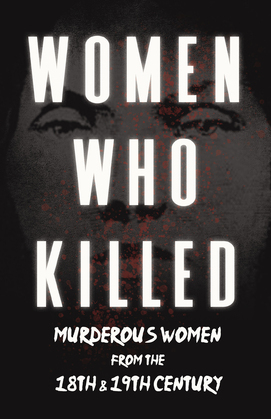 Women Who Killed - Murderous Women from the 18th & 19th Century

While it is generally agreed amongst criminologists that the world of crime is predominantly the domain of men, women played a much larger role than they do today before the twentieth century. Even then, women tended to commit property offences like theft, shoplifting, fraud, and forgery, as well as prostitution or soliciting. However, there have been those throughout history who have also committed some of the most brutal murders the world has ever known. ?Women Who Killed? looks at the most notorious murder cases involving women from the 18th & 19th centuries, examining in detail their crimes, characters, trials, and punishments. Offering a fascinating yet chilling insight into the minds and crimes of female murderers, ?Women Who Killed? is highly recommended for those with an interest in historic crimes and criminology in general. Contents include: ?Mary Blandy?, ?Mrs. Margaret Caroline Rudd?, ?Mary Lefley?, ?Mary Lamb?, ?Lizzie Borden?, ?Florence Elizabeth Maybrick?, ?Mary Eleanor Wheeler?, ?Ann Britland?, and ?Elizabeth Berry?. Read & Co. History is proudly publishing this brand new collection of classic articles now complete with the introductory essay ?The Relations of Women to Crime? by Ely Van De Warker.