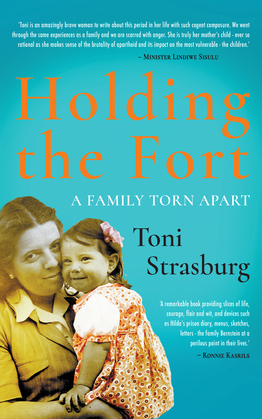 A family torn apart
by Toni Strasburg (Author)
Buy for $11.00 Excerpt
Nonfiction Social science Political science
warning_amber
One or more licenses for this book have been acquired by your organisation details

‘I always tried to be cheerful when I saw my mother. I never told her that Frances was sad and weepy and wouldn’t eat, and that Keith was clingy and woke me several times a night, or that Pat was withdrawn and hard to approach.’ Activists Rusty and Hilda Bernstein were arrested with many other South Africans following the 1960 State of Emergency and held for three months without trial. Toni, their eldest, at sixteen was left to look after her three younger siblings and was their only child allowed to visit them in jail. Hilda kept a diary of her time in detention, filled with letters to the children, drawings for the younger siblings, poems, plays and menus she made to keep her fellow detainees entertained. Years later, Toni pieces together her mother’s diary, snippets from her father's writing and her own recollection, trying to make sense of this tumultuous time. 'Holding the Fort' is the heart-breaking story of a family separated by unjust laws.