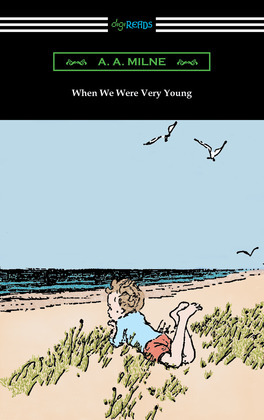 When We Were Very Young

by A. A. Milne (Author)
Buy for $3.99 Excerpt
Fiction Poetry
warning_amber
One or more licenses for this book have been acquired by your organisation details

First published in 1924, “When We Were Very Young” is the timeless collection of poetry by A. A. Milne. The introduction to the collection suggests that the narrator is meant to be Christopher Robin, the child at the center of Milne’s famous tales of The Hundred Acre Wood. In the poem “Teddy Bear”, readers are first introduced to Milne’s most famous character, Winnie-the-Pooh, who was originally called “Mr. Edward Bear” by Milne’s real-life son, Christopher Robin Milne. “When We Were Very Young” contains over 40 poems that beautifully describe the innocence, magic, and creativity of childhood. Classic poems such as “Halfway Down” capture the unique experience of growing up, where a child has one foot in the nursery and one in the grown-up world. Milne’s poems are whimsical, entertaining, and touching as they describe the world of make-believe and fantasy that is so appealing to young readers. Generations of children and parents alike have enjoyed reading these lovely poems to each other and many of the verses have been set to music and incorporated into television shows and movies. A copy of this engaging and heart-warming poetry collection belongs on the shelf of every child’s library.