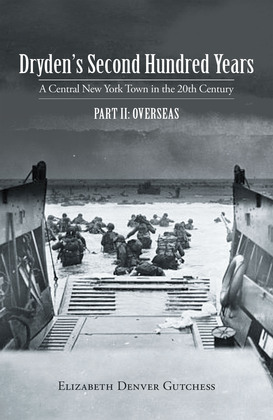 Dryden?s Second Hundred Years (Part II) does two exceptional things. First, its tight focus on local participation in World War II paradoxically chronicles the entire war, a conflict which drew its combatants from small rural townships like Dryden NY, assigned and scattered them throughout the world, and then delivered the survivors back home again, creating in every small American community a microcosm of the entire conflict, an eye-witnessing of the whole story. Second, that story is told here largely in local participants? own words, in letters from camps, troopships, carriers, cruisers, foxholes, and hospitals, their voices a quiet backdrop to the horrific war they had been asked to fight. The resulting narrative suggests that those who don?t know history ? while not always doomed to repeat it ? are very likely doomed to live their lives without perspective, to mistake inconvenience for hardship, and hardship for catastrophe, and to be blind to the miracle of everyday normal life.