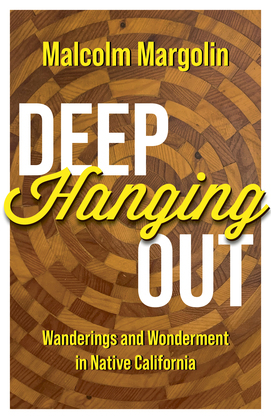 Fifty years of deep hanging out in California’s Indian country

Writer and publisher Malcolm Margolin has been “deep hanging out”—or immersing himself in a social, informal way—in California’s Indian country since the 1970s. This volume collects thirty articles, introductions, and other pieces he wrote about California’s diverse Indian country (well over one hundred tribes), drawn mainly from the quarterly magazine he cofounded in 1987, News from Native California. He shares with his readers the experiences, knowledge, and cultural renewal that California Indians have generously shared with him, often after years of friendship, from the erection of a ceremonial enclosure in Northern California—built to fall apart within a generation so that the knowledge of how to construct one is always current—to a visit by aboriginal Hawaiians in diplomatic recognition of native Southern Californian tribes. He draws on both archives and interviews with elders in longer reports about leadership traditions, pedagogical techniques, and conservation practices in various parts of the state—fascinating glimpses into worldviews very different from those of contemporary America. Filled with insight and affection, as well as some of the most gorgeous writing, Deep Hanging Out will appeal both to newcomers and to those whose roots and hearts reside in the state’s Indian country.