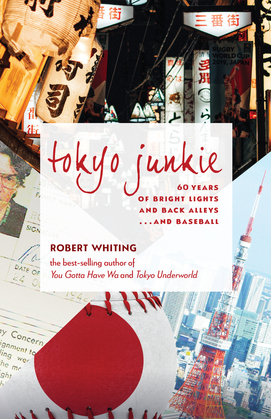 2021 is the 50th Anniversary of the San Francisco Peace Treaty ending the US Occupation of Japan.

A World Transformed: Whiting charts Tokyo evolution from a third world slum where only 25% of the city had flush toilets, with the rivers filled with toxic sludge, the water undrinkable, and the air so polluted people wore face mask, to the most modern metropolis on the globe. It is the richest city in the world, the cleanest, safest, most modern, most transportation efficient, most fashion conscious and the politest city anywhere—with arguably the best selection of restaurants on the planet, boasting more than twice as many Michelin 3-star restaurants as any other city, including Paris.

A combination of a memoir and a social history and cultural examination. Read Tokyo Junkie and you will understand Japan, Tokyo, and why anyone would want to live there.

Author has solid credentials as someone who reveals Japan “from the inside”:

Spans a lifetime, bookended from the first Tokyo Olympics (1964) to the current one (postponed to 2021), a hook for discussion