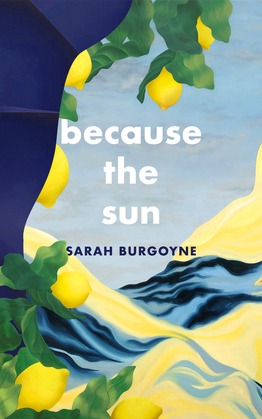 Camus’s Meursault and Thelma and Louise meet up under the blazing sun.

Vexed by the ‘unremarkable star’ that ‘presses’ Camus’s Meursault to commit murder, Because the Sun considers the blazing sun as a material symbol of ambient violence – violence absorbed like heat and fired at the nearest victim. Likewise, as a friendship between women confronts gendered aggression in Thelma and Louise, the sun becomes the repository of pain, the high noon that pushes us through desert after desert. Because the Sun’s pastiche of voices embodies both stylistic and formal relentlessness by teasing out tonalities that blend and merge into each other, generating a blinding effect, like looking into the sun.

“Breathless and death defying, the poems in Because the Sun are high-wire work. They sway above us in a blazing light of Burgoyne’s making. It is so rare that a book of poems is both a tuning fork for our minds as well as a balm for our bodies. But that is exactly what happens page after page in this blazing book.” —Michael Dickman, author of Days & Days

“This beautiful work wraps Camus’s The Stranger in a poetics concerning erasure/+ hope. Out of the titular Sun’s burning punctum burst telling shards of what is erased by Camus’s remarkable construction of whiteness in-the-masculine: the dead ‘Arab,’ the female body’s interminable violations – but also its warming, even blinding capacity for consequential pleasures.” —Gail Scott, author of Heroine

“Sarah Burgoyne begins with the sun and ends with flowers. In between is a complicated exploration of what it means to exist within a tradition that is Camus, Rimbaud, Blake. Taking her cue from Sara Ahmed, she notices how hard it is to challenge this tradition and yet that it matters to do it anyway.” —Juliana Spahr, author of That Winter the Wolf Came