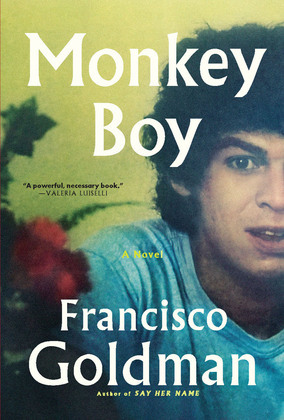 A novel of enormous achievement, Monkey Boy tells the tale of Francisco Goldberg, a middle-aged writer who grapples with the challenges of family and love, legacies of violence and war, and growing up Guatemalan and Jewish in America.

Francisco Goldman’s first novel since his acclaimed, nationally bestselling Say Her Name (winner of the Prix Femina étranger), Monkey Boy is a sweeping story about the impact of divided identity―whether Jewish/Catholic, white/brown, native/expat―and one misfit’s quest to heal his damaged past and find love.

Our narrator, Francisco Goldberg, an American writer, has been living in Mexico when, because of a threat provoked by his journalism, he flees to New York City, hoping to start afresh. His last relationship ended devastatingly five years before, and he may now finally be on the cusp of a new love with a young Mexican woman he meets in Brooklyn. But Francisco is soon beckoned back to his childhood home outside Boston by a high school girlfriend who witnessed his youthful humiliations, and to visit his Guatemalan mother, Yolanda, whose intermittent lucidity unearths forgotten pockets of the past. On this five-day trip, the specter of Frank’s recently deceased father, Bert, an immigrant from Ukraine – pathologically abusive, yet also at times infuriatingly endearing ― as well as the dramatic Guatemalan woman who helped raise him, and the high school bullies who called him “monkey boy,” all loom.

Told in an intimate, irresistibly funny, and passionate voice, this extraordinary portrait of family and growing up “halfie,” unearths the hidden cruelties in a predominantly white, working-class Boston suburb where Francisco came of age, and explores the pressures of living between worlds all his life. Monkey Boy is a new masterpiece of fiction from one of the most important American voices in the last forty years.