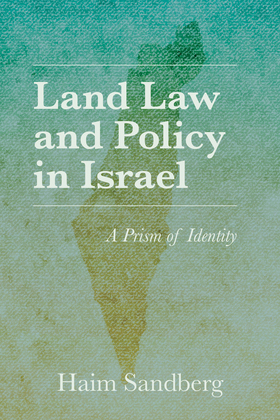 A Prism of Identity
by Haim Sandberg (Author)
Buy for $29.99 Excerpt
Nonfiction History History by country Middle East Israel Law Government
warning_amber
One or more licenses for this book have been acquired by your organisation details

As one of the smallest and most densely populated countries in the world, the State of Israel faces serious land policy challenges and has a national identity laced with enormous internal contradictions. In Land Law and Policy in Israel, Haim Sandberg contends that if you really want to know the identity of a state, learn its land law and land policies.

Sandberg argues that Israel's identity can best be understood by deciphering the code that lies in the Hebrew secret of Israeli dry land law. According to Sandberg, by examining the complex facets of property law and land policy, one finds a unique prism for comprehending Israel's most pronounced identity problems.

Land Law and Policy in Israel explores how Israel's modern land system tries to bridge the gaps between past heritage and present needs, nationalization and privatization, bureaucracy and innovation, Jewish majority and non-Jewish minority, legislative creativity and judicial activism. The regulation of property and the determination of land usage have been the consequences of explicit choices made in the context of competing and evolving concepts of national identity. Land Law and Policy in Israel will prove to be a must-read not only for anyone interested in Israel but also for anyone who wants to understand the importance of land law in a nation's life.