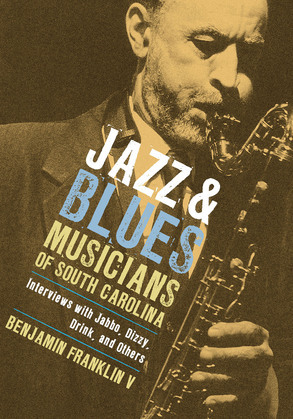 From Jabbo Smith, Dizzy Gillespie, and Drink Small to Johnny Helms, Dick Goodwin, and Chris Potter, South Carolina has been home to an impressive number of regionally, nationally, and internationally known jazz and blues musicians. Through richly detailed interviews with nineteen South Carolina musicians, jazz historian and radio host Benjamin Franklin V presents an oral history of the tradition and influence of jazz and the blues in the Palmetto State.

Franklin takes as his subjects a range of musicians born between 1905 and 1971, representing every decade in between, to trace the progression of these musical genres from Tommy Benford's and Jabbo Smith's first recording sessions in the summer of 1926 to the present day. Diverse not only in age but also in race, gender, instruments, and style, these musicians exemplify the breadth of South Carolina's jazz and blues performers. In their own colorful words, the musicians recall love affairs with the distinctive sounds of jazz and blues, indoctrinations into the musical world, early gigs, fans, drugs, military service, amateur night at the Apollo Theater, and influential friendships with other well-known musicians. As the story of the South Carolina musical scene is tightly interwoven with that of the nation, these narratives also include appearances by Tony Bennett, Miles Davis, Count Basie, Helen Merrill, Pharoah Sanders, Sister Rosetta Tharpe, and other significant musicians.

These interviews also document the lasting value of music education. In particular they stress the importance of the famed Jenkins Orphanage in Charleston and of South Carolina State University in Orangeburg in nurturing young musicians' talent.

Arranged in chronological order by the subjects' birth years, these interviews are augmented by photographs of the musicians, collectively serving as a unique record of representative jazz and blues musicians who have called South Carolina home.