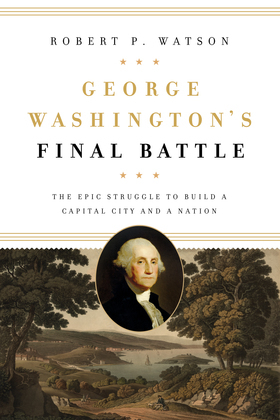 Despite America?s newly won independence, a bitter dispute over whether to have a capital and where to locate it almost tore the young nation apart. Few have written about the key role George Washington played in settling this question.

George Washington?s Final Battle recounts Washington?s exceptional political skill and involvement in the placement of America?s capital, moving it from New York to Philadelphia to the city that ultimately bore his name. Washington oversaw the surveying, negotiated land deals, raised funds, selected the architect, chose the final design, and altered the plans as the city took shape. He quietly worked behind the scenes to push for the Potomac River location. Washington visited various construction sites even after his presidency, making the federal city his last great contribution to public life.

Robert P. Watson?s book will fascinate not only historians but also a broad readership interested in the founding period, American presidency, and history of Washington, DC. This highly readable book relays a little-known tale of founding intrigue and an underappreciated side of Washington?s political acumen and leadership. Though he died less than a year before President Adams moved into the White House, Washington?s vision, influence, and talent for political compromise united a contentious country around a capital and a sense of nationhood.