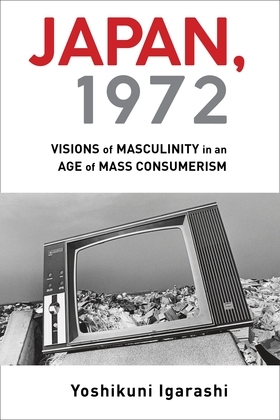 By the early 1970s, Japan had become an affluent consumer society, riding a growing economy to widely shared prosperity. In the aftermath of the fiery political activism of 1968, the country settled down to the realization that consumer culture had taken a firm grip on Japanese society. Japan, 1972 takes an early-seventies year as a vantage point for understanding how Japanese society came to terms with cultural change.

Yoshikuni Igarashi examines a broad selection of popular film, television, manga, and other media in order to analyze the ways Japanese culture grappled with this economic shift. He exposes the political underpinnings of mass culture and investigates deeper anxieties over questions of agency and masculinity. Igarashi underscores how the male-dominated culture industry strove to defend masculine identity by looking for an escape from the high-growth economy. He reads a range of cultural works that reveal perceptions of imperiled Japanese masculinity through depictions of heroes’ doomed struggles against what were seen as the stifling and feminizing effects of consumerism. Ranging from manga travelogues to war stories, yakuza films to New Left radicalism, Japan, 1972 sheds new light on a period of profound socioeconomic change and the counternarratives of masculinity that emerged to manage it.