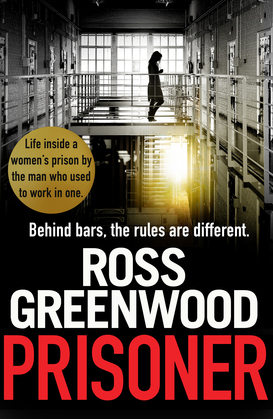 From the Amazon charts bestselling author of The Snow Killer comes a shocking thriller inspired by the true stories of a male prison officer in a women’s prison. Prisoner is about how far the inmates will go to survive behind bars, and the temptations and trials the prisoner officers deal with every day. Join Ross Greenwood for an insider’s glimpse into a secret world.
Prison Officer Jim Dalton is used to walking the landings on the male side of Peterborough Prison. It’s a dangerous place, fuelled by testosterone-driven violence, but he’s done the job for a long time. He understands the unwritten rules, and he has the prisoners’ respect.

When a relative is sent to the jail, Dalton is transferred to the female side of the prison. His next shift is so easy, he can’t believe that the officers over there get paid the same wages. He sleeps well for the first time in years.

But when he is assigned to the young offenders’ wing, dealing with female prisoners no longer seems so simple. As every day passes, and he gets to know the women better, he is slowly drawn in to new traps and a new nightmare. One which could destroy everything.

Ross Greenwood returns with this shocking, page-turning and utterly compelling glimpse behind the bars of a women's prison. From a man who walked the landings himself...

'Move over Rebus and Morse; a new entry has joined the list of great crime investigators in the form of Detective Inspector John Barton. A rich cast of characters and an explosive plot kept me turning the pages until the final dramatic twist.' author Richard Burke

‘Master of the psychological thriller genre Ross Greenwood once again proves his talent for creating engrossing and gritty novels that draw you right in and won’t let go until you’ve reached the shocking ending.’ Caroline Vincent at Bitsaboutbooks blog

'Ross Greenwood doesn’t write clichés. What he has written here is a fast-paced, action-filled puzzle with believable characters that's spiced with a lot of humour.' author Kath Middleton