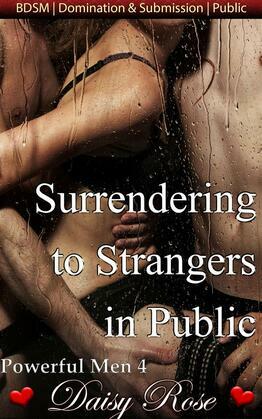 Surrendering To Strangers In Public

It starts off as a simple bet. "I bet you can't get that hottie to go home with you." Then, it's, "I bet you can't get her to wear that toy out in public." Ally doesn't know that her boyfriend is with her because of a series of perverse bets with his friends. When the lies come to light, she is humiliated. She gets back at him by making him watch as she sleeps with one of his friends.

Somehow, they manage to make it into the shopping mall without her tripping over nothing, though she is fully aware that she's walking funny. She's pretty sure everyone can see how oddly she's carrying herself. She hopes they don't know.

Everything looks phallic. The cucumbers, the zucchini, the cylindrical water bottles. She swallows the lump in her throat as she thinks of the best fizzy drink to add to her cart and has to hold back a moan that comes unbidden from her throat, much to George's amusement.

Things get worse when they run into his colleague, Alan. She's been seeing a lot of Alan, mostly because they do group calls a lot and they've been working on some sort of big project that requires a lot of back and forth. He's foreign, though, here on loan from a company that's based in South Africa. From what she's gathered from past conversations that she has eavesdropped in on, she is mostly certain that he outranks George in some way, giving more instructions than taking them.

She shudders when his smoldering gaze finds her, like he's undressing her with his eyes. Her knees are weak and she has to lean closer to George for support.

She hopes he can't see through the tight dress she's wearing. It's black, which helps hide the fact that she isn't wearing a bra underneath.