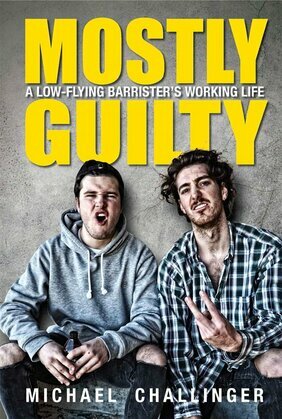 A book for the general reader rather than lawyers, this often tongue-in-cheek account of Michael Challinger's interactions with the criminals he defends gives a first-hand account of the quirky nature of human beings.
Mostly Guilty deals with the workings of the lowest level of the Australian legal system. It's about the down-to-earth cases that happen daily in Magistrates' Courts. It does so through the experiences and anecdotes of a low-flying criminal barrister. While the cases are from Victoria, the book makes reference to other states and has relevance and interest Australia-wide.
The style is light, punchy and informal, with lots of direct speech and many funny yarns. Some of the book is tongue-in-cheek (and even politically incorrect) but it also makes serious points throughout. It's entertaining as well as informative.
The chapters are short, and generally deal with specific offences (shop theft, for example) or areas of law (bail). Others recount particular cases in an ironic or colourful way. Most cases are of low to medium criminality so the light-hearted tone is not inappropriate.
Most legal memoirs are by big-shot advocates or retired judges. Mostly Guilty is different, and doesn't take itself too seriously. Michael Challinger still practises as a criminal barrister at the Melbourne Bar. He spent eight years as a lawyer in Papua New Guinea and also practised in London. He's a music lover and keen traveller, having visited more than 120 countries. He lives in Melbourne.