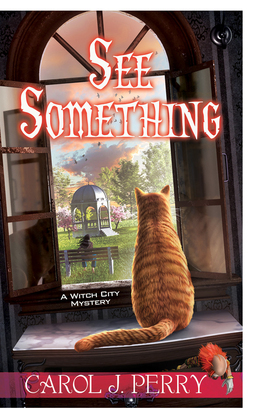 Lee has been promoted from field reporter to program director. Keeping track of all the shows and managing the local TV personalities—including a cowboy, a clown, and a performing dog—has her head spinning. Perhaps that’s what makes her take pity on the distraught woman she finds sitting alone on a bench on the Salem common. When she realizes that the poor woman doesn’t even know her own name, Lee takes her into the warmth of the home she shares with her Aunt Ibby and their clairvoyant gentleman cat, O’Ryan. Maybe Lee can use her own psychic gifts to divine the woman’s identity.

Lee’s detective beau Pete Mondello wants to talk to the “Jane Doe,” but before he can investigate, he’s called to a crime scene. A body has been found washed up in a narrow harbor cove. As harmless as her new houseguest seems, Lee can’t help but wonder if she may be harboring a killer . . .


Praise for the Witch City Mysteries