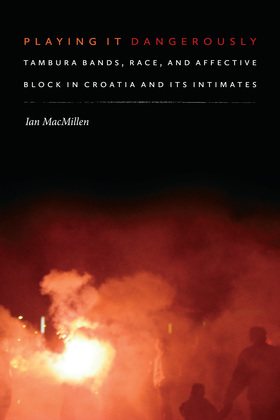 <P>Playing It Dangerously questions what happens when feelings attached to popular music conflict with expressions of the dominant socio-cultural order, and how this tension enters into the politics of popular culture at various levels of human interaction. Tambura is a genre-crossing performance practice centered on an eponymous stringed instrument, part of the mandolin family, that Roma, Croats, and Serbs adopted from Ottoman forces. The acclamation that one "plays dangerously" connotes exceptional virtuosic improvisation and rapid finger technique and is the highest praise that a (typically male) musician can receive from his peers. The book considers tambura music as a site of both contestation and reconciliation since its propagation as Croatia's national instrument during the 1990s Yugoslav wars. New sensibilities of 'danger' and of race (for instance, 'Gypsiness') arose as Croatian bands reterritorialized musical milieus through the new state, reestablishing transnational performance networks with Croats abroad, and reclaiming demilitarized zones and churches as sites of patriotic performance after years of 'Yugoslavian control.' The study combines ethnographic fieldwork with archival research and music analysis to expound affective block: a theory of the dialectical dynamics between affective and discursive responses to differences in playing styles. A corrective to the scholarly stress on music scenes saturated with feeling, the book argues for affect's social regulation, showing how the blocking of dangerous intensities ultimately privileges constructions of tambura players as heroic male Croats, even as the music engenders diverse racial and gendered becomings.</P>