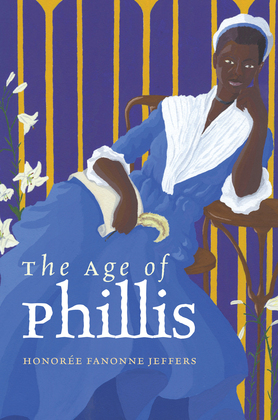 The Age of Phillis

In the shadow of the American Revolution, a young, African American woman named Phillis Wheatley published a book of poetry, Poems on various Subjects, Religious and Moral (1773). When Wheatley's book appeared, her words would challenge Western prejudices about African and female intellectual capabilities. Her words would astound many and irritate others, but one thing was clear: this young woman was extraordinary. Based on fifteen years of archival research, The Age of Phillis, by award-winning writer Honorée Fanonne Jeffers, imagines the life and times of Wheatley: her childhood with her parents in the Gambia, West Africa, her life with her white American owners, her friendship with Obour Tanner, her marriage to the enigmatic John Peters, and her untimely death at the age of about thirty-three.

Woven throughout are poems about Wheatley's “age”—the era that encompassed political, philosophical, and religious upheaval, as well as the transatlantic slave trade. For the first time in verse, Wheatley's relationship to black people and their individual “mercies” is foregrounded, and here we see her as not simply a racial or literary symbol, but a human being who lived and loved while making her indelible mark on history.