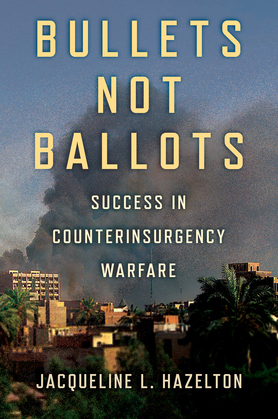 In Bullets Not Ballots, Jacqueline L. Hazelton challenges the claim that winning "hearts and minds" is critical to successful counterinsurgency campaigns. Good governance, this conventional wisdom holds, gains the besieged government popular support, denies support to the insurgency, and makes military victory possible. Hazelton argues that major counterinsurgent successes since World War II have resulted not through democratic reforms but rather through the use of military force against civilians and the co-optation of rival elites.

Hazelton offers new analyses of five historical cases frequently held up as examples of the effectiveness of good governance in ending rebellions—the Malayan Emergency, the Greek Civil War, the Huk Rebellion in the Philippines, the Dhofar rebellion in Oman, and the Salvadoran Civil War—to show that, although unpalatable, it was really brutal repression and bribery that brought each conflict to an end. By showing how compellence works in intrastate conflicts, Bullets Not Ballots makes clear that whether or not the international community decides these human, moral, and material costs are acceptable, responsible policymaking requires recognizing the actual components of counterinsurgent success—and the limited influence that external powers have over the tactics of counterinsurgent elites.