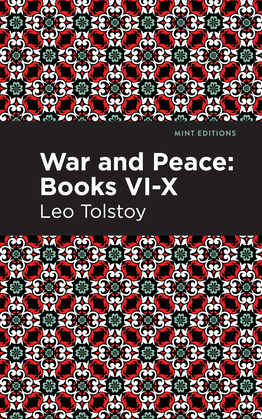 War and Peace (1869) is a novel by Russian writer Leo Tolstoy. Serialized between 1865 and 1867, it was published in book form in 1869 and has since been recognized as a masterpiece of world literature. Notable for its epic scale, War and Peace encompasses hundreds of characters, diligently following its five central families across fifteen years while featuring detailed imaginings of such historical figures as Napoleon Bonaparte. In Books VI-X, he explores the emotions of his wide cast of characters who, during a period of tenuous peace, attempt to return to a sense of normalcy. Following Napoleon’s defeat of Russian and Austrian forces at the Battle of Austerlitz, the Rostov, Bezukhov, and Bolkonsky families struggle to adapt to a changing world. While Prince Andrei attempts to balance his political obligations with his growing affection for Natasha Rostov, his friend Pierre finds himself at a crossroads. Disillusioned with Freemasonry, obsessed with discovering a way to live ethically, he grows increasingly volatile and despondent. When Natasha is attacked by the vicious Anatole Kuragin, Pierre finds himself in the position of comforting her, and they soon form a strong attachment. After several years, however, Napoleon’s army begins advancing on Russia once more, bringing uncertainty and chaos to its traumatized people. With its juxtaposition of political peace with the private and public turmoil of his characters, Tolstoy’s story brings history to life while reminding us that the past is always closer than we care to think. As ambitious as it is triumphant, Leo Tolstoy’s masterpiece is an epic novel of history and family, a story of faith and the will to persevere in the face of unspeakable catastrophe. War and Peace is a work that transcends both history and description, not just for the scale of its narrative and setting, but for the scope of its philosophical interests. Since its publication, it has been praised as an essential work of literature by Ivan Turgenev, Gustave Flaubert, Thomas Mann, and Ernest Hemingway, and has been adapted for film, theater, and television countless times. With a beautifully designed cover and professionally typeset manuscript, this edition of Leo Tolstoy’s War and Peace is a classic of Russian literature reimagined for modern readers.