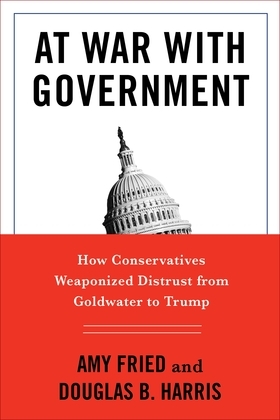 At War with Government

Polling shows that since the 1950s Americans’ trust in government has fallen dramatically to historically low levels. In At War with Government, the political scientists Amy Fried and Douglas B. Harris reveal that this trend is no accident. Although distrust of authority is deeply rooted in American culture, it is fueled by conservative elites who benefit from it. Since the postwar era conservative leaders have deliberately and strategically undermined faith in the political system for partisan aims.

Fried and Harris detail how conservatives have sown distrust to build organizations, win elections, shift power toward institutions that they control, and secure policy victories. They trace this strategy from the Nixon and Reagan years through Gingrich’s Contract with America, the Tea Party, and Donald Trump’s rise and presidency. Conservatives have promoted a political identity opposed to domestic state action, used racial messages to undermine unity, and cultivated cynicism to build and bolster coalitions. Once in power, they have defunded public services unless they help their constituencies and rolled back regulations, perversely proving the failure of government. Fried and Harris draw on archival sources to document how conservative elites have strategized behind the scenes. With a powerful diagnosis of our polarized era, At War with Government also proposes how we might rebuild trust in government by countering the strategies conservatives have used to weaken it.