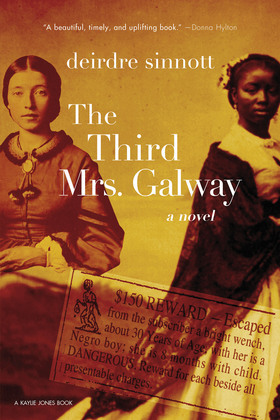 Antislavery agitation is rocking Utica in 1835 when a young bride discovers an enslaved family hiding in her shed, setting in motion the exhumation of long-buried family secrets.

"This suspenseful novel vividly breathes life into the early years of the United States, and the burden of slavery the young Republic carries with it...This book engrosses the reader and does what historical fiction does best. In bringing the past into sharp focus, it shines a light on our present day. Highly recommended."
--Historical Novels Review, Editor’s Choice Pick

"Author Sinnott is a Utica native who originated her city's Abolition History Day Celebration, facilitated 'Resisting the New Jim Crow' at the National Abolition Hall of Fame and Museum, and is a historical consultant for the Fort Stanwix Underground Railroad History Project. She sensitively grounds her first novel in a white woman's perspective (Sinnott is white) while focusing the action and urgency around the Black Americans whose fate rests in Helen Galway’s hands."
--Literary Hub, one of Bethanne Patrick’s 5 Books You May Have Missed in July 2021 picks

"In this eloquent debut, a diverse cast of characters embodies the political, class, and racial upheavals of its time and milieu, and does it all in living local color...[A] powerful look at the prologue to Emancipation."
--Kirkus Reviews

It’s 1835 in Utica, New York, and newlywed Helen Galway discovers a secret: two people who have escaped enslavement are hiding in the shack behind her husband’s house. Suddenly, she is at the center of the era’s greatest moral dilemma: Should she be a “good wife” and report the fugitives? Or will she defy convention and come to their aid?

Within her home, Helen is haunted by the previous Mrs. Galway, recently deceased but still an oppressive presence. Her husband, injured by a drunken tumble off his horse, is assisted by a doctor of questionable ambitions who keeps a close eye on Helen. In charge of all things domestic is Maggie--formerly enslaved by the Galway family and freed when emancipation came to New York eight years earlier.

Abolitionists arriving in Utica to found the New York State Anti-Slavery Society are accused by the local papers of being traitors to the Constitution. Everyone faces dangerous choices as they navigate this intensely heated personal and political landscape.