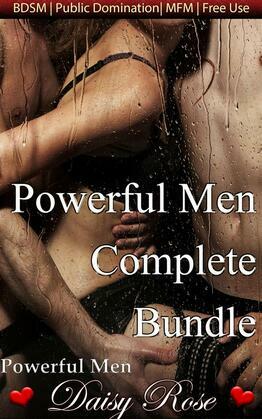 Be it in private or in public, these Powerful Men take who they want, when they want. In this bundle, you will find all four standalone steamy shorts including: Group Surrender, Submitting in a Train, Falling for the Groom and Surrendering to Strangers in Public.

Excerpt from 'Submitting in a Train'

"That was close, wasn't it?" he chuckles.

She huffs and levels him with a glare that only makes him grin harder. She has never dressed so fast in her life. The moment she heard the sound of the train coming, she flew into action, grabbing her shirt and pulling it over her head without thinking. Her pants were tugged on haphazardly and she had forgotten her underwear altogether.

Abel half pulls half carries her to the train and when he turns around to see that she has most of her clothes back on, he looks almost disappointed.

Thankfully, the section of the train they're in is completely empty.

"Hold on!" someone shouts  from outside, as if there was anything they could do to delay the train from moving away.

They turn to the source of the sound and her eyes widen. It's her classmates, the very same one she had left in school earlier.

"Miss Jane!" Jack's cheeks are tinted red and he's breathing heavily, as were the rest of the men who had managed to hop onto the train right before the automatic doors slide close and the train announced it's departure.

Tyler, Carter, and Kyle trail after him, looking a little bit sheepish, like schoolboys getting caught doing something they shouldn't have. She has a brief, somewhat paralyzing thought that they were the one who have done something to her car, but surely they don't-

They do look especially guilty.

"Do you know each other?" Abel asks, clearing coming to the same conclusion she has.

"Yeah," she says. She has almost forgotten that he was there at all. He looks particularly handsome, stepping up in front of her, like some sort of knight in shining armor ready to come to her defense.

"Who's this?" Jack glares at her new friend and she wonders if the jealousy she sees in his expression is sincere or merely a figment of her imagination. He's a little bit older than her and he's been flirting aggressively with her since the beginning, but she was so certain that he's just messing around.

"This is Abel. He's um-" she frowns. Are they friends? She barely knows him. She doesn't even know what he does for a living. Her face burns red with embarrassment from all the thing she's allowed the perfect stranger to do to her. She is filled by the sudden urge to wrap her arms around herself, but she isn't wearing her bra. Oh gods. They're doing to notice, aren't they? She's going to be in so much trouble-