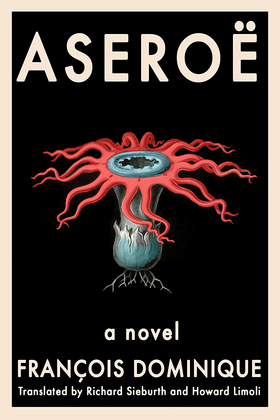 by François Dominique (Author), Richard Sieburth (Translator), Howard Limoli (Translator)
Buy for $16.99 Excerpt
Fiction Literary Biographical
warning_amber
One or more licenses for this book have been acquired by your organisation details

“A singular novel.” —Lydia Davis, author of Can’t and Won’t and Essays One

“An exhilarating adventure!” —Alberto Manguel, author of The Library at Night and Fabulous Monsters

“Extraordinary. . . . Brings to mind the great mushroom scenes of the film Phantom Thread. How not to be aroused by this whopping treat of verbal virtuosity?” —Mary Ann Caws, author of The Modern Art Cookbook

Aseroë, the mushroom, as object of fascination. First observed in Tasmania and South Africa, it appeared suddenly in France around 1920. It is characterized by its stench and, at maturity, its grotesque beauty.

Aseroë, the word, as incantation. Can a word create a world? It does, here. François Dominique is a conjurer, who through verbal sorcery unleashes the full force of language, while evoking the essential rupture between the word and the object. An impossible endeavor, perhaps, but one at the very heart of literature.

The narrator of Aseroë wanders medieval streets and dense forests, portrait galleries, and rare bookshops. As he explores the frontiers of language, the boundaries of science, art, and alchemy melt away, and the mundane is overtaken by the bizarre. Inhabited by creatures born in darkness, both terrible and alluring, Aseroë is ultimately a meditation on memory and forgetting, creation, and oblivion.

François Dominique is an acclaimed novelist, essayist, poet, and translator. He has received the Burgundy Prize for Literature and is the author of eight novels, including Aseroë and Solène, winner of the Wepler Award and Prix littéraire Charles Brisset. He has translated the poetry of Louis Zukofsky and Rainer Maria Rilke and is the cofounder of the publishing house Ulysses-Fin-de-Siècle.