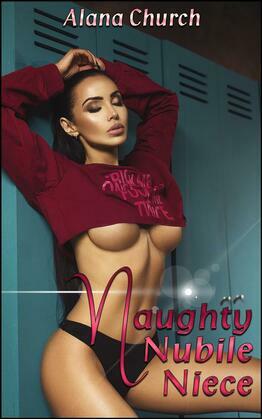 Twenty years ago, Jason Chapel made a terrible mistake. Now he's back home. But history has a way of repeating itself. He ran away from his little sister, his beloved Jessica. But during a hot, steamy weekend, Jessica's daughter Emily will push him to the edge of resistance. Can Jason resist Emily's incestuous urgings? Or will Jason succumb to the temptations of his "Naughty Nubile Niece?"

This...isn't bad, Jason thought, sitting down and putting his feet up. The breeze ruffled his hair, and he pushed it back with his fingers. He kicked off his sandals, wiggling his toes in the breeze. The air was soft, the sun was warm on his face, and for once he didn't have to look forward waking up and putting a tie that felt like a noose around his neck. He didn't have to think about anything. If he wanted, he could stay up until one or two in the morning, drink beer until he passed out, and sleep until noon the next day.

Though...he squinted. There was one black dot, out on the lake, that seemed to be getting closer. Tan arms rose and fell in a steady rhythm, and Jason could see the faint spray kicked up by churning feet.

What the hell, Jason thought irritably, when it became obvious the swimmer was headed for the house. This is private property. What does a guy have to do to get a little privacy? Put up an electric fence? Or maybe stock my part of the shoreline with piranhas?

He scowled and got to his feet as the nearing figure stood up in the shallowing water and splashed towards the grassy shore.

She saw him at the same time as he recognized her, and his mouth fell open in recognition and shock. She had the same cheerleader's body that he had learned with his mouth and hands when he was eighteen. The same coal-black hair, falling in a dripping coil around her tan shoulders. The same narrow waist, the same high, sweet breasts, perfect for a lover's touch.

In his shorts, Jason's manhood stiffened, the reaction to his little sister fierce and primal. Time hadn't sated that urgency, nor had distance. A year could go by. Ten years, twenty, a hundred, and he would still want Jessica with all the passion of his teenage self. Almost before he knew it, he had taken a step forward, wanting to tear off the bottle-green bikini that did absolutely nothing to hide her gorgeous body, throw his sister to the grassy ground, and ravish her, slaking two decades of lust in an endless, splintered moment.

"Jessica?" he whispered, his voice shaking. "What are you doing here?"

"Uncle...Uncle Jason?" the young woman said sharply in reply. "What are you doing here?"

And Jason's world came crashing down.

Oh, Jesus. Not my sister. My niece.