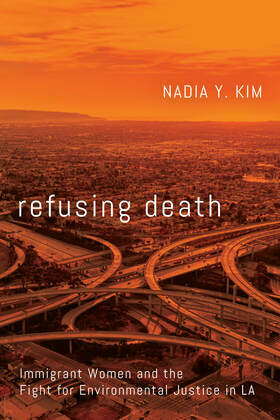 The industrial-port belt of Los Angeles is home to eleven of the top twenty oil refineries in California, the largest ports in the country, and those "racist monuments" we call freeways. In this uncelebrated corner of "La La Land" through which most of America's goods transit, pollution is literally killing the residents. In response, a grassroots movement for environmental justice has grown, predominated by Asian and undocumented Latin@ immigrant women who are transforming our political landscape—yet we know very little about these change makers. In Refusing Death, Nadia Y. Kim tells their stories, finding that the women are influential because of their ability to remap politics, community, and citizenship in the face of the country's nativist racism and system of class injustice, defined not just by disproportionate environmental pollution but also by neglected schools, surveillance and deportation, and political marginalization. The women are highly conscious of how these harms are an assault on their bodies and emotions, and of their resulting reliance on a state they prefer to avoid and ignore. In spite of such challenges and contradictions, however, they have developed creative, unconventional, and loving ways to support and protect one another. They challenge the state's betrayal, demand respect, and, ultimately, refuse death.