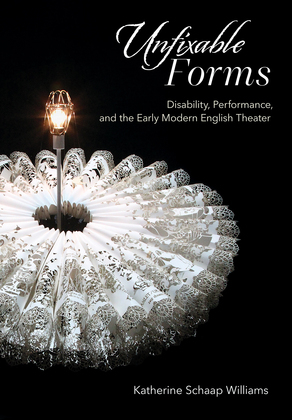 Unfixable Forms explores how theatrical form remakes—and is in turn remade by—early modern disability. Figures described as "deformed," "lame," "crippled," "ugly," "sick," and "monstrous" crowd the stage in English drama of the sixteenth and seventeenth centuries. In each case, such a description distills cultural expectations about how a body should look and what a body should do—yet, crucially, demands the actor's embodied performance. In the early modern theater, concepts of disability collide with the deforming, vulnerable body of the actor. Reading dramatic texts alongside a diverse array of sources, ranging from physic manuals to philosophical essays to monster pamphlets, Katherine Schaap Williams excavates an archive of formal innovation to argue that disability is at the heart of the early modern theater's exploration of what it means to put the body of an actor on the stage.

Offering new interpretations of canonical works by William Shakespeare, Ben Jonson, Thomas Dekker, Thomas Middleton, and William Rowley, and close readings of little-known plays such as The Fair Maid of the Exchange and A Larum For London, Williams demonstrates how disability cuts across foundational distinctions between nature and art, form and matter, and being and seeming. Situated at the intersections of early modern drama, disability studies, and performance theory, Unfixable Forms locates disability on the early modern stage as both a product of cultural constraints and a spark for performance's unsettling demands and electrifying eventfulness.