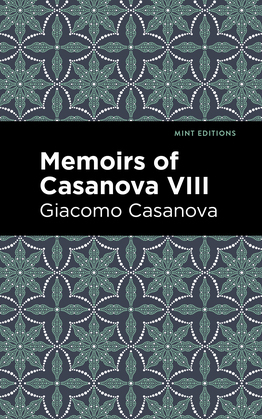 Memoirs of Casanova (1792) is the autobiography of Italian adventure and socialite Giacomo Casanova. Written at the end of his life, the Memoirs capture the experiences of one of Europe’s most notorious figures, a man whose escapades as a gambler, womanizer, and socialite are matched only by his unique gift for sharing them with the world. More than perhaps any other man, Casanova sought to emulate the lessons of the Enlightenment on the level of everyday life, a sentiment captured perfectly in the opening sentence of his Memoirs: “I will begin with this confession: whatever I have done in the course of my life, whether it be good or evil, has been done freely; I am a free agent.”Memoirs of Casanova Volume VIII finds Giacomo Casanova back in Venice, his birth city. After years of disgrace and failure, he has finally begun to succeed as a professional gambler, frequenting the city’s casinos and building his already-infamous reputation. Amid so much excitement, he falls for a beautiful nun, a chaste woman who shows signs of desire despite her commitment to God. As their affections turn into a heated affair, Casanova struggles to divide his public and private lives, drawing attention to himself from local authorities looking for any reason to throw him in prison for good. With a beautifully designed cover and professionally typeset manuscript, this edition of Giacomo Casanova’s Memoirs of Casanova is a classic of European literature reimagined for modern readers.