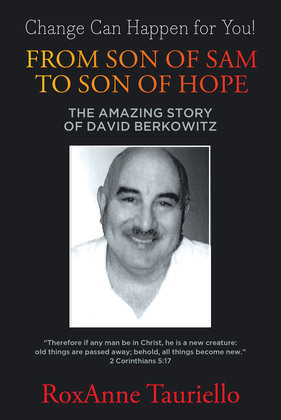 From Son of Sam to Son of Hope

His name is David Berkowitz. Once the notorious "Son of Sam." His former lifestyle consisted of being an arsonist, setting over 1,000 fires, a Satanist, and serial killer, who in the late 1970s brought a wave of terror to the streets of New York. After the biggest manhunt in New York's history, the headlines read "caught," and David Berkowitz was sentenced to 350 years behind bars. While in prison, David Berkowitz became a born-again Christian, and in 1995, RoxAnne Tauriello was granted an interview with the former "Son of Sam," where he discussed the dark satanic influences that led to his murderous rampage and how he came to repentance and faith in Jesus Christ. "The RoxAnne Tauriello Show: David Berkowitz" interview went on to win the CAPE Award (Cable Award for Programming Excellence). Follow along as RoxAnne gets to know the former "Son of Sam" through personal letters, phone conversations, and prison visits. Learn how David Berkowitz serves the Lord in prison and around the world, and read amazing ministry accounts of victory through Jesus Christ. You will also get a firsthand look behind razor wire and prison walls, as RoxAnne takes you inside the units where inmates are housed in tiny "Dungeons of Doom." Learn about strip searches, shakedowns, constant fear, and the loss of all personal freedom. Now known as "Son of Hope," see how God's love, mercy, and transforming power, changed David's life from of one of the vilest of sinners to a new creation in Christ. Learn how you too can receive God's forgiveness of sin, a new life, along with God's peace, hope, joy, and purpose for life and living, and eternal life in heaven, never to face God's judgement and hell. DISCLOSURE: David Berkowitz receives no compensation from sales of this book.