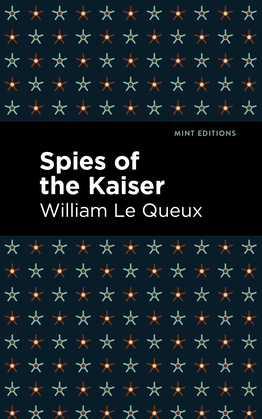 Spies of the Kaiser

Spies of the Kaiser (1909) is a novel by Anglo-French writer William Le Queux. Published at the height of Le Queux’s career as a leading author of popular thrillers, Spies of the Kaiser indulges in the paranoid atmosphere of the leadup to World War One to weave a sinister tale of espionage and political conspiracy. Despite the playful and imaginative nature of his fiction, Le Queux was genuinely concerned—and immensely paranoid—about the possibility of war with Germany. In addition to selling countless copies, his work inspired a generation of secret service officers who would go on to form Britain’s legendary MI5. “Germany is our friend—for the moment…What may happen to-morrow?” Alerted to a possible plot by German secret agents to invade Britain, a young solicitor and his trusted allies attempt to disrupt these shadowy figures—before it’s too late. While a nation wakes, works, eats, and sleeps, these anonymous heroes track down sources, search for clues, and place their lives on the line for the good of the many. While the truth is unclear, the stakes are not: the fate of their people is in their hands. Written only a few years before the outbreak of the First World War, Spies of the Kaiser incorporates years of research and experience to weave a tale from the deepest fears of the nation. With detailed maps, secretive discussions, and prescient descriptions of submarines and airplanes used for war, Le Queux’s novel seems pulled from headlines yet unwritten, and tragically to come. While not much is known about the author, it is possible his claims of firsthand knowledge regarding the murky movements of spies and diplomats throughout Europe and Britain were true. One thing, however, is certain: his paranoia was far from unfounded. With a beautifully designed cover and professionally typeset manuscript, this edition of William Le Queux’s Spies of the Kaiser is a classic espionage thriller reimagined for modern readers.