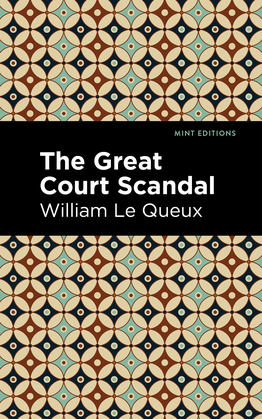 The Great Court Scandal (1907) is a novel by Anglo-French writer William Le Queux. Published at the beginning of Le Queux’s career as a leading author of popular thrillers, The Great Court Scandal is a story of international espionage, intrigue, and forbidden romance. Using his own research and experience as a journalist and adventurer, Le Queux crafts an accessible, entertaining tale for readers in search of a literary escape. Known for his works of fiction and nonfiction on the possibility of Germany invading Britain—a paranoia common in the early twentieth century—William Le Queux also wrote dozens of thrillers and adventure novels for a dedicated public audience. Although critical acclaim eluded him, popular success made him one of England’s bestselling writers. In The Great Court Scandal, two British conmen wait in their upscale Paris hotel room for their ringleader to return. Guy—a high born man brought low through carelessness and misfortune—and Harry—a working class man gifted with wit and ambition—have had an unsuccessful time in the city, and are growing desperate to escape before the authorities catch up with them. Passing the time with mindless ribaldry and memories of danger and adventure, Guy and Harry are entirely unprepared for what comes next. When Roddy arrives with a stolen suitcase, he opens it to discover a parcel of letters belonging to the Crown Princess of Austria, whose scandalous secrets—however well hidden—will threaten her reign and her life. The Great Court Scandal is a throwback to the simpler days of entertainment, a bestseller that holds up over a century after it appeared in print. With a beautifully designed cover and professionally typeset manuscript, this edition of William Le Queux’s The Great Court Scandal is a classic thriller reimagined for modern readers.