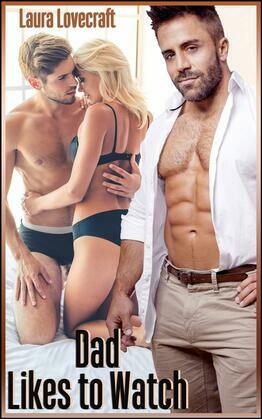 When Luke walks in on his mother having sex with another man, while his father films them, he demands to know what's going on. His father explains his mom is a hotwife and he likes to watch her with other men. Luke is upset at first, but when curiosity gets the better of him and he watches one of their movies it becomes a case of like father, like son, except Luke wants to do more than watch!

What should he do? Wait for Dad to come home? Was he supposed to just let Mom screw some guy in their bed? There was no way the guy didn't know she was married, there were pictures of mom and dad all over the house and in the bedroom. Plus, when he'd peeked through the window Luke noticed she wore her wedding band while she played with the guy's...

A flash of rage flowed through him. Yeah, this was more on his mother, the guy couldn't be here without her, but what type of guy was fine with banging a married woman right there in her husband's bed?

Luke fished his keys from his pocket and unlocking the door, eased it open. He slipped into the back hall and kept the lights off, feeling his way along the wall until he made his way into the dining room.

He could see light from his parents' room in the hallway. Guess Mom needed to see everything she was doing. On that note, he scrunched his face up when he heard her cry out, "Oh, God, that's deep!"

He quickly into his room, and grabbing the aluminum softball bat from the closet, he gripped it in both hands and stalked towards her room.  The door was open several inches, giving him a full view of the bed.

Mom was now on her knees, the guy behind her, his big hands on her hips as he pounded away on her. She was facing his way, and although he only hesitated for a few seconds, it seemed to last longer as every unwanted detail burned into his eyes. Her arms stretched out, her hands gripping the edge of the mattress.

Her blue eyes were wide, and her mouth wider, her red lips stretched into an O as the guy went at her hard enough to rock the bed.

"Giving it to me so good!" she gasped. "Where do want him to finish, baby?"

"I want to paint all that pretty face," the man, his muscular chest glistening with sweat moaned. "Then shove it in your mouth, while your h..."

"Get away from my mother!" Luke exploded into the room with the bat held high.

"Luke!" Mom's eyes went so wide they looked as if they were going to fall out of her head.

"What the hell?" The guy pushed away from his mother, sliding off the bed.

"Shut up and get out!" Luke bellowed, brandishing the bat as he headed around the bed. "You got ten seconds, or I'll bust your head open!"

"Luke, no!" Mom was on her knees, the sheet pulled up over her body. "It's not what you think!"

"You're cheating on dad!" Luke shouted at her.  "You're no better than this piece of..."

He whirled around at the sound of father's voice to see him sitting in a chair facing the bed. With the same slow-motion clarity he'd experienced watching his mother on the bed, he noticed several things in the few seconds he remained frozen in surprise.

His father was naked, and as he leaned over to grab something from the floor to cover himself, his right hand reached for the small table next to the chair, putting something down while he fumbled for his clothes.  Luke was stunned when he saw what he'd placed on the table.