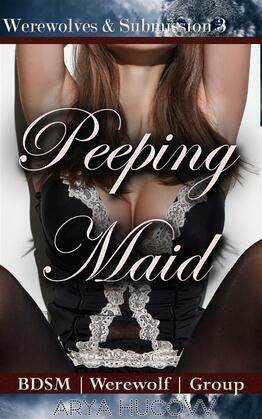 Ari is one of the many maids cleaning up after the messes left behind by rich, powerful Werewolves who let their animal out to play in the giant mansion away from civilization. What they do behind closed doors need to remain secret and she is more than willing to keep quiet about it. Ari just wants to earn enough money and graduate but that plans goes out the window when she's caught peeping.

"And what's 'your type', exactly?" she wriggles her brows at her and Ari rolls her eyes and snatches her drink back before Ashley can help herself out to it. "Stingy," she says.

Ari sticks her tongue out at her. "Get your own drink."

"Yeah," Ari says, frowning a little because they aren't supposed to talk about this.

"Have there been any new guys later?" she asks.

Ari levels her with a glare, but she's either oblivious to her glare or just doesn't care. The other girls are picking up on the awkwardness and are opting to keep quiet. Ashley smiles brightly at her, clearly expecting an answer, so she says, "You know we're not allowed to share things about our work."

Unable to curb their curiousity any longer, the others begin asking Ashley why there's so much secrecy about their work. Ari hasn't spilled yet no matter how much they hound her about it. It's her job and how she can afford coming for drinks.

Ashley has the sense to look a little bit contrite, but shrugs. "I don't work there anymore. Should be fine for me to tell, right?" Ari's reminded yet again of their difference. Ashley is a contemporary beauty, tall and blond with gorgeous skin and sharp green eyes. She was spotted by a modelling magazine and thinks she can pursue a career in modelling now.

Ari shakes her head but Ashley isn't looking at her anymore. She's always loved attention, revels in it.

"The place we work at, has like, all these rich men who pays stupid money."

Ari's heartbeat speeds up at the way she's describing it. It's not something they are allowed to share with outsiders. It's understandable that they would want to talk about the things they do at work, but that's exactly the reason why they have an in-house counselor.

Ashley was actually only there for a few months before she quit for the modelling job, but had to continue seeing the counselor every other week. She's paid a hundred dollars just for showing up and answering some questions. Ari wonders what kind of trouble she'll get into once the counselor manages to find out that Ashley's sharing information with non-employees.

Part of the reason why Ari's here is to prevent this exact thing from happening. She prays that Ashley knows that she needs to shut up. She doesn't want Ashley to get in trouble and she would very much prefer not to look stuck up and be ostracized by her peers for not divulging sensitive information regarding her job.

Ari squeezes Ashley's arm and gives her a brief shake of her head when she has her attention.

To her surprise, Ashley grins and leans over to take a sip of her drink, and then, she starts talking. "I can't tell you where the place is or like, any of the names, but I can tell you what happens," she lowers her voice dramatically. "So, the last time I wa-"