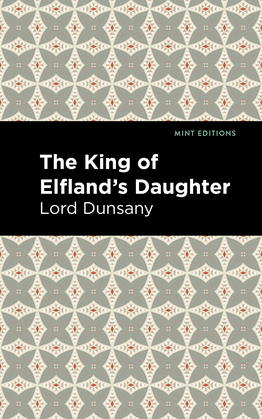 The King of Elfland's Daughter

The King of Elfland’s Daughter (1924). Having established himself as a bestselling author of short fiction, Dunsany published The King of Elfland’s Daughter, his second novel. Recognized as a pioneering author of fantasy and science fiction, Dunsany is a man whose work, in the words of H. P. Lovecraft, remains “unexcelled in the sorcery of crystalline singing prose, and supreme in the creation of a gorgeous and languorous world of incandescently exotic vision.” In accordance with tradition, the Lord of Erl assents to the will of the people, who wish to be ruled by a magical being. In order to fulfill their request, he sends his son Alveric, a trustworthy young man, to the realm of Elfland, where time moves slowly and citizens live long, prosperous lives. There, Alveric falls in love with Lirazel, the daughter of the King, and convinces her to return to Erl as his wife. He arrives triumphantly, but soon Lirazel grows tired of the ways of men. Caught between the demands of tradition and the desires of his heart, Alveric must decide to whom he will remain loyal. Largely forgotten after its publication, The King of Elfland’s Daughter was eventually recognized as a groundbreaking work of high fantasy and fairytale fiction. With a beautifully designed cover and professionally typeset manuscript, this edition of Lord Dunsany’s The King of Elfland’s Daughter is a classic of British fantasy fiction reimagined for modern readers.