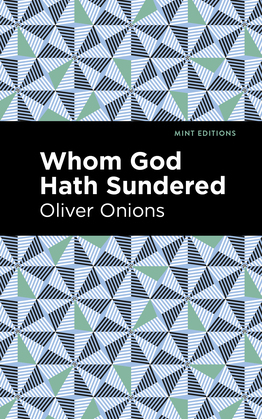 Whom God Hath Sundered (1910-1913) is a trilogy by Oliver Onions. Published toward the beginning of Onions’ career as a leading novelist and short story writer specializing in genre fiction, Whom God Hath Sundered is a largely unknown trilogy of crime novels deemed a forgotten classic by British literary critic Martin Seymour-Smith. From the beginning, In Accordance With the Evidence—the first installment of the trilogy—is as much the story of James Jeffries as it is of Archie Merridew. Unlike Jeffries, who was “atrociously poor…in those days,” Merridew was a young man whose every opportunity seemed to have been ordained at birth: “His folks lived at Guildford; his father paid his rent for him, thirty-eight pounds a year; and his pleasant quarters under the roof had everything that mine hadn't.” As their story unfolds, Jeffries falls for the beautiful Evie Soames, but jealousy and competition with Archie threaten to derail his every move. Unhappy with his low-paying work, luckless in love, Jeffries begins to resent Archie with a near-violent passion. When Archie becomes engaged to Evie, Jeffries is left with no choice. As he looks back on his life from the distance of a dozen or more years, he recounts his path from hardship to murder, laying bare the psychological traumas that led him to commit his crime. In parts two and three, The Debit Account and The Story of Louie, we see the consequences of his heinous act unfold. With a beautifully designed cover and professionally typeset manuscript, this edition of Oliver Onions’ Whom God Hath Sundered is a classic of British literature reimagined for modern readers.