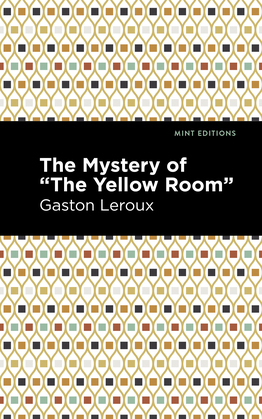 The Mystery of the "Yellow Room"

The Mystery of the Yellow Room (1908) is a novel by French writer Gaston Leroux. Originally serialized in L’Illustration from September to November 1907, The Mystery of the Yellow Room marked the first appearance of popular character Joseph Rouletabille, a reporter and part-time sleuth who features in several of Leroux’s novels. Originally a journalist, Leroux turned to fiction after reading the works of Arthur Conan Doyle and Edgar Allan Poe. Often considered one of the best locked-room mysteries of all time, the novel has been adapted several times for film and television. Joseph Rouletabille is more than meets the eye. A reporter by profession, he spends his free time working as an amateur detective, using his journalistic talents to compile facts and track down leads. When the young daughter of a prominent professor is found badly beaten in a locked room at the Château du Glandier, Roulebatille sets out to investigate with his trusted assistant Sainclair. After conducting interviews with several members of the castle staff, he is told that France’s top detective Frédéric Larsan has been assigned to the case. Larsan soon names Robert Darzac, Ms. Stangerson’s fiancé, as his primary suspect. Having already ruled Darzac out, Roulebatille begins to grow suspicious when the man is arrested and seems hesitant to defend himself. Working behind the scenes, the unassuming sleuth must race against time to prove Darzac’s innocence and stop Ms. Stangerson’s attacker from finishing what he started. The Mystery of the Yellow Room is a story of danger and suspense from one of history’s finest detective novelists. Joseph Rouletabille is without a doubt France’s answer to Sherlock Holmes. With a beautifully designed cover and professionally typeset manuscript, this edition of Gaston Leroux’s The Mystery of the Yellow Room is a classic of French literature reimagined for modern readers.