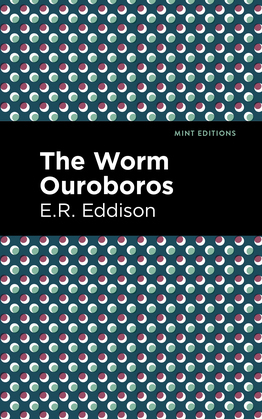 The Worm Ouroboros (1922) is a high fantasy novel by E. R. Eddison. Inspired by the Norse sagas and medieval history, Eddison crafted an epic story of magic, adventure, romance, and war. Praised by New York Times critic Edwin Clark as a novel that “transcends all ordinary life,” The Worm Ouroboros is frequently named among the greatest works of fantasy fiction ever produced. At their palace in Demonland, Lord Juss, his brothers Goldry and Spitfire, and their cousin Brandoch Daha receive an ambassador from Witchland. After a brief introduction, the visiting dwarf reveals his business—King Gorice XI demands their absolute fealty. Rather than submit, however, Lord Juss challenges Gorice to a wrestling match with Goldry, to be held on the neutral Foliot Isles. Knowing the fate of Mercury hangs in the balance, Goldry fights bravely and defeats the wicked King. Through black magic, however, an evil sorcerer condemns Gordry to imprisonment on a mystical mountain peak. Distraught, Juss, Spitfire, and Brandoch return to Demonland to mount an army in order to march on the capital of the Witches, who have joined forces with Lord Gro of Goblinland. The Lords of Demonland break through enemy lines, making their way to the citadel of Carcë, where they mistakenly believe Goldry has been taken. The Worm Ouroboros is a story of bravery and betrayal by a master of high fantasy whose imaginative gifts have influenced generations of devoted readers. With a beautifully designed cover and professionally typeset manuscript, this edition of E. R. Eddison The Worm Ouroboros is a classic of British literature reimagined for modern readers.