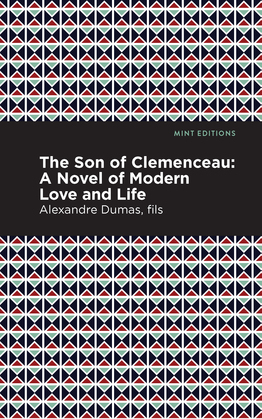 The Son of Clemenceau

A Novel of Modern Love and Life
by Alexandre Dumas (Author)
Buy for $9.99 Excerpt
Fiction Historical Literary
warning_amber
One or more licenses for this book have been acquired by your organisation details

While traveling through Europe an unsuspecting man is attacked by a military officer and later discovered by a mysterious old woman with a personal vendetta. It’s a thrilling tale fueled by family, betrayal and hidden agendas.

Claudius Ruprecht is a young man who was raised without a traditional family. He grew up an orphan with no real knowledge of his mother or father. As an adult, he embarks on a university tour that takes him across Europe including Germany where he encounters the eccentric, Major von Sendlingen. Claudius is challenged to a duel and must defend himself or face sudden death. After wounding the major, he finds shelter with a girl and her father. But he is recognized by a looming figure, an old beggar woman, who knows his true identity--the son of a murderer.

The Son of Clemenceau: A Novel of Modern Love and Life is an intricate story that balances romance with revenge. The title character is an empathetic hero who unknowingly bears the curse of his father. It’s an intriguing tale that weaves multiple narratives into one satisfying plot.

With an eye-catching new cover, and professionally typeset manuscript, this edition of The Son of Clemenceau: A Novel of Modern Love and Life is both modern and readable.