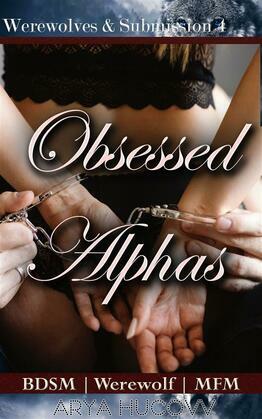 Aren is hopelessly in love- in lust with a little human in the woods protected by her two guardians. She's a fragile little creature, sweet and innocent in all the right ways, but her guardians guard her zealously and if Aren wants to get close, he will have to be very careful. He doesn't just want to get close. He wants to have her, claim her in a way no one else has and keep her for himself.

Aren moves through the trees like a shadow, melting into the darkness whenever the option presents itself, hiding from the moon and keeping out of sight. His nerves skitter between fear of getting caught and anticipation of finally getting what he wants- what he deserves. It's heady and warm, intoxicating. He could get drunk on the feeling alone, could let it drag out what he's about to do just to taste it on his tongue a while longer.

He knows the forest like the back of his hand, but tonight offers him another challenge. If he gets caught, he would not make it through the night. He has hidden his scent so other wolves would not be able to find him or track him down. He has always been a predator. The thought of him being hunted- being prey, is a peculiar one that he is not familiar with in the slightest. There are many other shifters in the city but most of them are either werewolves like himself, or prey shifters.

But he isn't going to let that stop him. She belongs to him. She has belonged to him ever since he first saw her. She is unafraid even though she should be terrified. Something like her should be afraid of the whole world, so soft and breakable. He could snap her neck right there and no one would be able to challenge him since she is the one who had wandered into his territory uninvited.

He lets her go, but he keeps track of her progress.

Her guardians are Devon and Wren, both Alpha Werewolves and they acquired her from another pack. A human.

Aren thought they have all gone extinct. They are rare, precious. Coveted as a status symbol of sorts. They are kept as precious members of the pack, but are rarely allowed outside of their own territories, which means it is rare to even see one. He was lucky enough to touch her.

The house in the middle of the woods is in darkness, except for a light in the bedroom. He doesn't notice any movement, but he knows that she's inside and she's alone. Her guardians are not in today, which is exactly why Aren had chosen today to act. It is also why the other wolf had chosen today as well. It is rare for both her guardians to be away, but they have gotten careless with the passing of time, thinking that she will be able to keep herself safe from harm. They thought keeping her out here away from civilization would forget about her and leave her alone.

Finding her- finding this place, had been fate. He fell in love with her scent and he did the right thing and waited for her to be old enough to be claimed. Years he had waited, patiently watching from afar as she blossomed from a bubbly young girl to a beautiful young woman.

She just turned eighteen and he decided to wait until her guardians are out before making his move. He has an arsenal of things he intends to use on her.