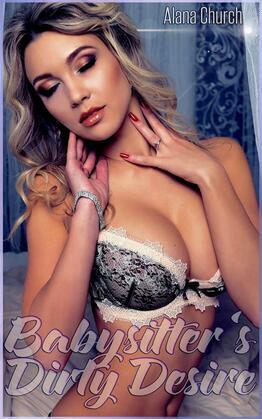 Beverly has been lusting after her handsome neighbor for years. Unfortunately, Graham is married, with a little girl. But when his bitchy wife leaves him, Bev sees her chance! Will she be able to seduce the older man, and will Graham be willing to cater to her naughty, forbidden fantasies? Find out in "Babysitter's Dirty Desires!"

Mr. Cole's wife had left him! And a door she had assumed had been closed and locked forever had cracked just the tiniest bit open. A gleam of sunlight poured through. Not much. But enough to give her hope.

Beverly hoped she hadn't been too obvious earlier, when Graham had come up to collect Vivian. She hadn't thought anything of it, when her mother had asked her to look after the little girl. She had known Viv since Graham and his nagging, shrewish, stone-cold bitch of a wife had moved into the rented house across the street three years ago. Then, she had been little more than a round, puzzled face in a stroller. But now she was an absolutely delightful little girl, her head full of questions and so sweet-tempered and loving Bev could hardly believe she was Elizabeth Cole's daughter.

And Beverly had been harboring a hopeless crush on Vivian's father almost since the moment she had met him. Graham Cole wasn't a male model. Which was good, since Bev didn't want one. But he had the kindest blue eyes and the nicest smile she had ever seen. And his voice, when he said her name, made her insides go all soft and tingly. Graham always had something nice to say when they met, whether it be at the mailbox or working in the yard or when he was taking Vivian for a walk. And the way he doted on his daughter was proof that he was a good man, regardless of whether his wife had left him or not.

She left the bedside lamp on, but turned off everything else. After a careful look down the hall, to make sure her parents were in their bedroom, she lifted up her mattress and pulled out the special sketchbook. The one her parents didn't know about.

The sexy sketchbook, where she lived out her secret, dirty fantasies.

Her fingers shaking, Beverly opened the cover. Here were the naughty pictures. The forbidden fantasies. Here, Graham was naked, her fertile imagination picturing what his body would look like without all those aggravating clothes in the way. The tips of her fingers brushed across a sketch done in heavy pencil. The reclining nude wasn't obviously aroused. But in her mind, he was.

I want him so bad. Could it really happen? I could be the woman for him that his wife never was. All I need is one chance. What if he saw me...

Here she was, in a sensible dress and an embroidered apron, standing at a counter with a mixing bowl in front of her. But the back of her dress was pulled up to her waist, showing that she wasn't wearing any panties.

In the second picture, she was hanging up laundry on a clothesline. But the front of her dress was wide open. Over a small fence in the background, a male figure was eyeing her appreciatively, and from the expression on her face, she was enjoying the attention.

A third, standing out in the open, rain pouring down, an open umbrella hanging carelessly at her side. Her dress was plastered to her chest, and Bev moaned, almost able to feel the scrape of the heavy cotton across her sensitive breasts.