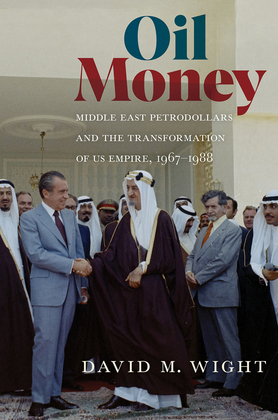 In Oil Money, David M. Wight offers a new framework for understanding the course of Middle East–US relations during the 1970s and 1980s: the transformation of the US global empire by Middle East petrodollars. During these two decades, American, Arab, and Iranian elites reconstituted the primary role of the Middle East within the global system of US power from a supplier of cheap crude oil to a source of abundant petrodollars, the revenues earned from the export of oil.

In the 1970s, the United States and allied monarchies, including the House of Pahlavi in Iran and the House of Saud in Saudi Arabia, utilized petrodollars to undertake myriad joint initiatives for mutual economic and geopolitical benefit. These petrodollar projects were often unprecedented in scope and included multibillion-dollar development projects, arms sales, purchases of US Treasury securities, and funds for the mujahedin in Afghanistan. Although petrodollar ties often augmented the power of the United States and its Middle East allies, Wight argues they also fostered economic disruptions and state-sponsored violence that drove many Americans, Arabs, and Iranians to resist Middle East–US interdependence, most dramatically during the Iranian Revolution of 1979.

Deftly integrating diplomatic, transnational, economic, and cultural analysis, Wight utilizes extensive declassified records from the Nixon, Ford, Carter, and Reagan administrations, the IMF, the World Bank, Saddam Hussein's regime, and private collections to make plain the political economy of US power. Oil Money is an expansive yet judicious investigation of the wide-ranging and contradictory effects of petrodollars on Middle East–US relations and the geopolitics of globalization.