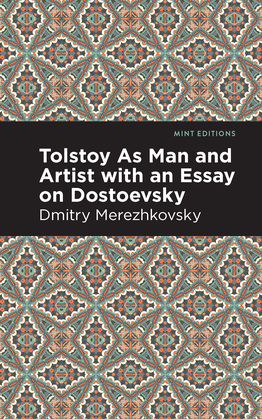 Tolstoy As Man and Artist with an Essay on Dostoyevsky

Tolstoy as Man and Artist with an Essay on Dostoevsky (1901) is a work of literary criticism by Dmitriy Merezhkovsky. Having turned from his work in poetry to a new, spiritually charged interest in fiction, Merezhkovsky sought to develop his theory of the Third Testament, an apocalyptic vision of Christianity’s fulfillment in twentieth century humanity. In this collection of essays on Tolstoy and Dostoevsky, Merezhkovsky explores the spiritual dimensions of the written word by examining the interconnection of being and writing for two of Russian literature’s most iconic writers. For Dmitriy Merezhkovsky, an author who always wrote with philosophical and spiritual purpose, the figure of the artist as a human being is a powerful tool for understanding the quality and focus of that artist’s work. Leo Tolstoy, author of such classics as War and Peace and Anna Karenina, developed a reputation as an ascetic, deeply spiritual man who envisioned his art as an extension of his political and religious beliefs. Dostoevsky, while perhaps more interested in the psychological aspects of human life, pursued a similar path in such novels as The Brothers Karamazov and Crime and Punishment. In Merezhkovsky’s view, these writers came to embody in their lives and works the particularly Russian conflict between truths both human and divine. Tolstoy as Man and Artist with an Essay on Dostoevsky is an invaluable text both for its analysis of its subjects and for its illumination of the philosophical concepts explored by Merezhkovsky throughout his storied career. With a beautifully designed cover and professionally typeset manuscript, this edition of Dmitriy Merezhkovsky’s Tolstoy as Man and Artist with an Essay on Dostoevsky is a classic work of Russian literature reimagined for modern readers.