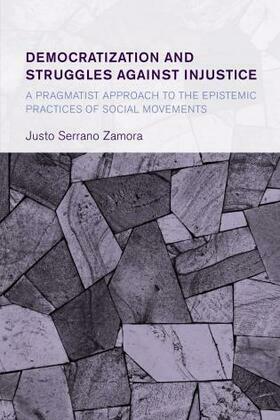 Democratization and Struggles Against Injustice

In specialized literature as well as in the eyes of regular citizens, social movements are often considered to be actors of democratization. Among other things, social movements criticize existing deficits in democratic systems; they promote practices of deliberation and enact non-hierarchical structures that challenge existing democratic institutions. Very often, these challenges emerge from the context of struggle against unjust situations involving social exclusion, economic inequalities or the violation of fundamental rights.

Democratization and Struggles Against Injustice draws on the insights of one of the greatest American philosophers, John Dewey, as well as on some central intuitions of Frankfurt School Critical Theory to account for the connection between the democratic potential of social movements and their capacity to articulate injustice and promote just social relations. Particularly, it develops the idea that this double capacity can be explained by introduction of the pragmatist notion of experimental inquiry into the analysis of the epistemic practices of the mobilized. By introducing pragmatist epistemology to the study of social movements, Democratization and Struggles Against Injustice broadens the possibilities for their emancipatory potential.