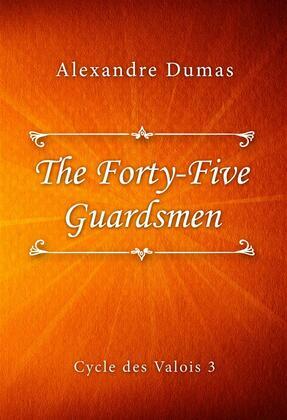 This novel was first published in 1847 and is the last of a trilogy devoted to des Valois. The action is set between 1585 and 1586, thirteen years after the massacre of St. Bartholomew. Having succeeded his brother Charles IX, Henry III has reined for ten years without having managed to calm political and religious unrest, dividing the Kingdom into the factions. The Forty-five guardsmen of the title are Gascons engaged by the Duke of Épernon, favourite of the King, to accept a secret mission.

It concerns the revenge of Diane de Méridor upon the Duc d’Anjou for his base betrayal of Bussy d’Amboise. Historically it commences with the execution of Salcede and the arrival of the Forty-Five at Paris, and deals with the Guise intrigues, the campaign of Anjou in Flanders and his death.

The sequel to Chicot the Jester and final book of the “Cycle des Valois.” This story begins six years after the famed “Duel of the Mignons” between the favorites of the courts of King Henry III and Henri the Duke of Guise (somewhat allied with the King’ brother, Francis, Duke d’Anjou and Alencon). Dumas concludes his historical fiction on the War of the Three Henries while: detailing the formation of the Forty-Five Guardsmen (who were to become the Musketeers); following Chicot the Jester as he stays loyal to the failing regency of King Henry III; and continuing the story of Diana (a principal character in the previous book).