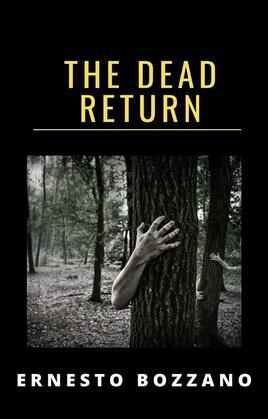 by Ernesto Bozzano (Author)
Buy for €3.99 Excerpt
Nonfiction Esotericism, occult
warning_amber
One or more licenses for this book have been acquired by your organisation details

This volume corresponds, originally, to two monographs by Ernesto Bozzano, whose titles are "Of some theoretically interesting varieties of cases of spirit identification" and "Mediumistic experiences and death events in their relations with the phenomena of Infestation". The fusion of these two monographs was carried out by the author with the precise intention of showing that the proof of the survival of the soul does not depend exclusively on the details provided by the communicating deceased, but on secondary, background details, in which the classical identification information has nothing to do with. Among the general evidence, all of which converge to demonstrate the existence and survival of the human spirit, are the following eight themes: 1. The latent existence in human subconsciousness of wonderful supernormal faculties, emancipated from the constraints of space and time, and, above all, independent of the laws of biological evolution. 2) The existence of the phenomena of bilocation, which have the same characteristic as that noted for the supernormal subconscious faculties, since they arise during existence only when there is a crisis of vital impairment. It follows that the phenomena of temporary bilocation are a prelude to the phenomena of definitive bilocation, when the soul separates from the body. 3) The existence of numerous cases of apparitions of the dead at their death-bed, in which the theoretical efficacy in the spiritualist sense is independent of the usual proofs of spiritist identification on the basis of the personal details given by the communicating dead. Ghosts are often seen collectively by the dying and those present. 4) The existence of phenomena of premonitions of accidental death, in which the victim is foretold the feral event that awaits him, but in a deliberately obscure and reticent manner, and this until the event is over. 5) The existence of crossed correspondences, in which the telepathic message is sent to a mediumistic personality, who then divides it into fragments, which are transmitted to various mediums in such a way that only by putting them all together can the full meaning be grasped. Such experiments were devised by deceased entities to demonstrate survival. 6) The existence of numerous cases of apparitions of the dead after a short or long interval after their death, which occurs when such ghosts are viewed independently and collectively by various persons. 7) The existence of cases in which a deceased person reveals incidents that occurred after his death and that are ignored by all living people. 8) The existence of cases in which the deceased come to materialise, even for years, undergoing scientific investigations.