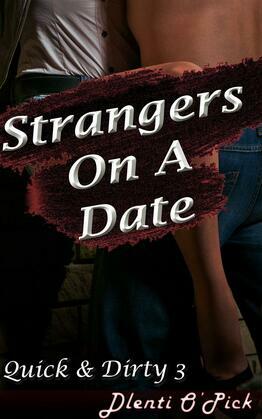 Strangers On A Date

Rosie is having such a terrible time with her date that she's contemplating climbing out of the bathroom window. Her blind date, on the other hand, thinks things are going well enough to corner her in an alleyway. When a stranger comes to her rescue, she thought that would be the end of it. Instead, the powerful man whispers secrets in her ears and continues where the other has left off.

"Thanks but um- I'm fine now. I can get going," she says, but he doesn't move at all. His hands are very big and warm against her cheek. The way he's looking at her now isn't accessing like earlier, he's looking at her hungrily, like he's deciding which part of her to consume first.

All the air leaves her lungs in a hurry. She's really in trouble now. She really shouldn't be turned on by this, but there's something about her knight in shining armor that's inexplicably irresistible. Or maybe it's just the princess in her who could never resist a cliche love story.

He leans in towards her until their cheeks are almost pressed together, and then he whispers something that reverberates in her bones: "I know your secret."

Her eyes widen and her heart starts a staccato beat against her chest. She hears it in her own ears, rapid and afraid. "I don't know what you're talking about," she says, and then, "You don't even know my name."

"Rosie," he draws out her name like caress against her skin. It goes from her ear down her neck and trickles all the way to her core. "I know what you do in the dark, Rosie," he says.

She stares wide-eyed at him when he pulls away enough for her to see him again. He doesn't look familiar to her. She shakes her head. "You can't-" she starts. "It's-"

"Impossible?" he finishes, his eyes intense as he stares down at her. "You enjoyed the way the man violated you earlier," he says. "If he had fought a little harder, if he had been more confident with himself, you would have let him take you, wouldn't you?"

She shakes her head. "That's not true."

She gasps, pulling away from him and failing miserably.

"You liked that he took control, don't you? You like being told what to do," he says. His voice is drenched in desire so palpable that she could almost taste it in the air.

It's impossible. There's no way he would know, no way he could have found out.