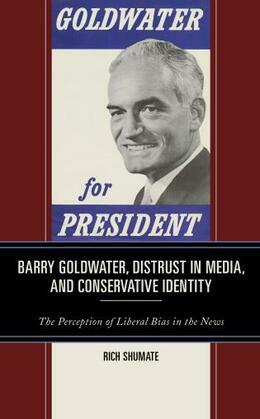 The perception that the news media in the United States have a liberal bias is a phenomenon that animates conservatives and affects the ways in which they consider both media content and political discourse. Despite professional standards that have been put in place to prevent deliberate bias, conservatives would argue that the news media tilt deliberately to the left. Barry Goldwater, Distrust in Media, and Conservative Identity: The Perception of Liberal Bias in the News explores the origins of this perception of a liberal bias—while managing to avoid the highly subjective quagmire of attempting to measure bias—by instead positing a social identity explanation for the perception. Rich Shumate posits that conservatives’ need to foster and maintain social identity as conservatives led them to perceive content from elite news media outlets as biased when it did not validate the way they saw the world, deeming it hostile and, by extension, “liberal”. Shumate explores the formation of this perception during the period from 1960–1964, a critical juncture in the American political sphere when conservatives organized to elect Barry Goldwater as president and ultimately came away from the experience bitter with the belief that the news media had stacked the deck against their candidate of choice. Scholars of communication, media studies, journalism, political science, and American history will find this book particularly useful.