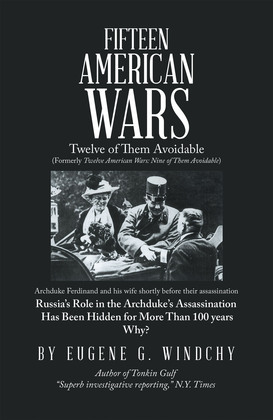 Eugene G. Windchy, author of Tonkin Gulf, investigates how fifteen wars began and how they might have been avoided. Among his surprising conclusions: Russia started World War I by killing the Archduke Ferdinand.

The assassination of Austria’s Archduke Ferdinand in Sarajevo, Bosnia, triggered World War I, an unprecedented catastrophe which led to Fascist and Communist states, World War II, anti-Communist wars in Korea and Vietnam, and a world bristling with nuclear missiles.

Textbooks tell us very little about the triggering event. Some do not mention the assassination. Others read as if the killer was a lone wolf. Disputing the lone wolf theory Windchy reports that sixteen men were convicted at trial, and he presents evidence that Russia was behind the operation. To gain territory, Russia in 1914 was trying to undermine the Austro-Hungarian Empire and the Ottoman Empire. This led to World War I in 1914 and to the Armenian genocide in 1915.

Wars often begin in ways unknown to the public. The American Civil War began when the Confederates fired upon Fort Sumter. But did you know the fort was trying to surrender? Why was it fired upon?

Did a “policy coup” in Washington demand that the United States change the governments of seven foreign countries? This was alleged by retired General Wesley Clark, former Supreme Allied Commander in Europe, after a series of informal visits to the Pentagon beginning in 1991.